Our Trip to Hoskins 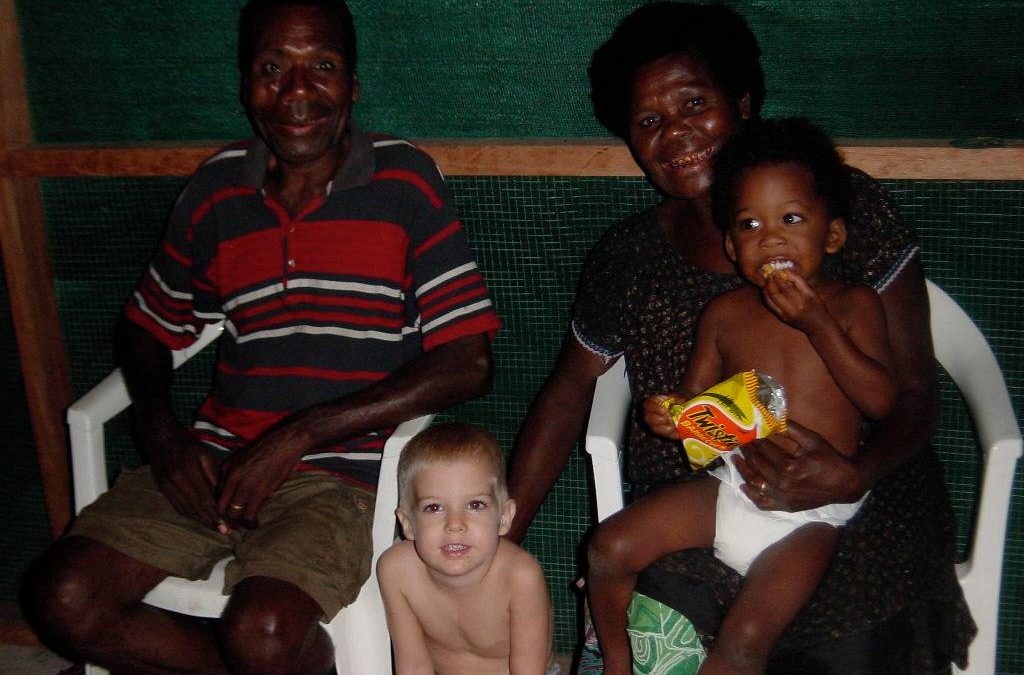 At the end of May, we returned to Hoskins, West New Britain Province, after being away for 14 YEARS!  What a bittersweet homecoming….

When we first moved to Hoskins in 2003, a local couple adopted me. Their names were Stanley and Maria Balu. They had 4 biological children: Alex, Patricia, Steven, and Esther; and two adopted: Me (Jenny) and Alex (a cousin become brother).

My family did not have a clear understanding of the Gospel, but rather held to a mix of traditional animistic beliefs and Catholicism. They lived in fear and darkness. Over the past 15 years, I have prayed fervently that they would hear and believe the Truth, and be set free from the bondage they were living in. About a year ago (maybe longer?), our friends, who are missionaries to the Nakanai people–which is my family’s language group, were back in the USA for a break. We got together for a meal, and I asked about my family. I heard that my brother, Alex, and his wife, Grace, had become believers. I was so excited to hear this news!

Upon our return to Papua New Guinea this year, I just knew that our family had to return to Hoskins!  I wanted Michael to see where we lived so long ago, and to be able to connect with our friends and family there before he returned to the USA for college. But, most of all, I needed to know about the rest of my family…did they remember me and think about me as much as I had thought of them?

I texted our missionary friends ahead of time to see if they could get word to my family that I was coming. Sadly, I had heard that my father had died, but I did not know if my mother was still alive. Many times over the past 15 years I had dreamed about walking up the path to her house and seeing her face again!
After arriving in Hoskins, I asked around about my family and found out that my mother had died also. This grieved my heart so badly. I had hoped and prayed all these years that I would be able to see them again and that they would become believers. Neither had happened. I felt so heavy and weighed down by this burden and felt like I had come “home” too late.
The day after arriving, our friend took me to Alex’s house. I was so nervous and excited and hoped he would remember me. As soon as we saw each other we both began to cry and hug. I really have no words to adequately describe that reunion. It was deep, because we were not just reuniting as brother and sister, but we now shared an even deeper bond because of our faith in the Messiah. I also got reacquainted with my sister-in-law, Grace. Her and Alex were very young when I met them before. Now, they had 8 children, with one more on the way.
After visiting at their house, Alex went with me to Esther’s house. Esther did not know that we were coming; she was so surprised to see me! I met her husband, John, who is a good man, and their 5 children. It was so good to see them again and to catch up on their lives. Steven, my other brother, is at school is Rabaul, so I did not get to see him. He is not married yet, and is doing well. Patricia is in Goroka, but will be transferring to teach in Port Moresby after the school holiday in December. (I got to see her a few weeks ago when she was flying through Port Moresby on her way to Rabaul. We squeezed each other so tight!)
Okay, back to Hoskins. Our week there was so sweet, despite Daniel being sick the first few days, and Tom being sick most of the week with Malaria. ☹
Every day, I either walked to Alex’s or Esther’s to visit, and sometimes they walked to where we were staying. I cooked a big dinner for everyone on the weekend and we took lots of photos! Michael was gifted with some shell money from Esther that had been in my mother’s family. My brother-in-law, John, brought some fresh fish as a gift for Tom the night before we left. We froze it, brought it home, and smoked it later—it was delicious!  Before leaving, Alex ceremonially presented me with shell money and stated that I am truly and officially his sister.
We went to church with Alex and Grace on the Sunday that we were there, and enjoyed sweet fellowship. Grace played guitar and lead in the singing, and Alex led different parts of the service. It is hard to put into words how I felt seeing them involved in the church, hearing their testimonies, and seeing how they live their life now, compared to before. There were many moments of joyful tears! This trip, along with the reunions, were something that I have dreamed of, prayed for, but at times never knew if it would happen on this side of eternity. While I was—and am—grieved that I could not see my parents, I took comfort knowing that they remembered us, talked about us, and always held onto hope that we would come back. I hope they know that I came back and that I always loved them and never forgot about them. They kept photos of our family and told their grandchildren we would return one day.
We all exchanged phone numbers and keep in touch through texts and phone calls now. Last week, I received news and photos that Grace safely delivered her baby—a girl—in the car on the way to the clinic! I have since spoken with Grace, and she gave me the news that the baby is my name sake; they named her Jennifer. I am one, proud Auntie!!! God-willing, I will be going “home” over the Christmas holiday to meet my new niece and to see Steven, who should be home for the holiday as well. I continue to pray for the rest of my family to know the truth and believe in the One who can give them eternal life and peace in this world.
In my heart, Hoskins is home.